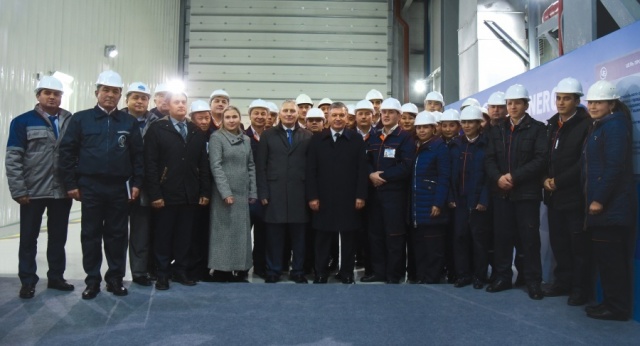 By President of our country Shavkat Mirziyoyev launched a new combined-cycle plant at the Tashkent TPP.

The head of our state pressed the symbolic start button of the new combined-cycle plant with a capacity of 370 MW.
The first power unit of the enterprise was put into operation in 1963, by 1971 the number of power units increased to 12. The total installed capacity of the station is 1860 MW.
After commissioning of a new combined-cycle plant, the station will generate an additional 2.6 billion kW/h of electricity and 110 thousand gigacalories of heat per year.
At a modern installation, the specific gas consumption for the generated electricity will be 223 g / kW/h, while at the operating power units this figure is almost high as twice. As a result, each year are saved 350.9 million cubic meters of natural gas.
To implement this project, in our country for the first time were installed a steam-gas turbine and generators of the American company “General Electric”. Modern equipment is also assembled from Belgium, Italy, Russia and other countries.
During implementing the project, were widely used the products of domestic enterprises, including “Uzkabel” JSC, Uzelektroapparat, Chirchik Transformer Plant and others. It made possible to significantly save currency and effectively use the attracted investments.
The operation and management of the combined-cycle plant are fully automated.
The introduction of the installation allowed the employment of many local young specialists. They upgraded their qualifications abroad and at Navoi TPP.

The President of our country noted that the use of energy-efficient technologies is the imperative of the time, it is necessary to implement such modern projects even more.