Dedicated to the further strengthening of economic cooperation 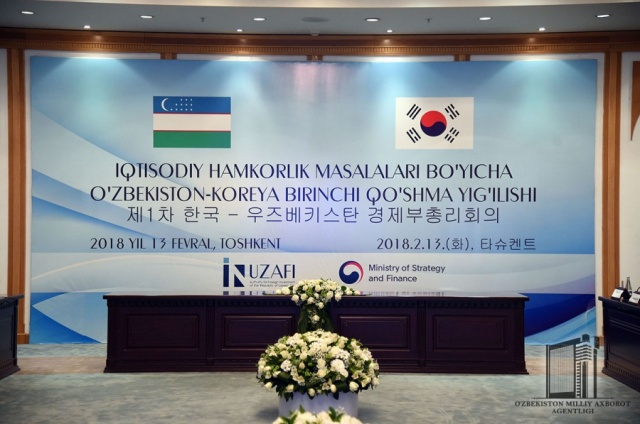 The first joint Uzbek-South Korean meeting on economic cooperation was held at the International Business Center in Tashkent on February 13.

The event was attended by heads of ministries and departments, companies and concerns of the two countries responsible for such areas as foreign trade, investment, banking and finance, fuel and energy, oil and gas, engineering, transport and communications, construction, chemical, food , textile industry, agriculture and water management, science and education, information technology and telecommunications, medicine and tourism.

Uzbekistan and South Korea have a strong friendship, strategic partnership and mutually beneficial cooperation. The Republic of Korea is one of the main investment partners of Uzbekistan, an active participant in the implementation in our country of large-scale projects aimed at modernizing and restructuring the economy, expanding production of competitive products and increasing exports. Currently, more than 70 South Korean companies operate in Uzbekistan. With the participation of South Korean investments 440 enterprises were opened, the volume of their production exceeds 5 billion US dollars.

In our country, in cooperation with South Korean partners, major investment projects have been implemented in the automotive, electric power, oil and gas, electrical, textile, ICT and other sectors. Recently, a decree of the President of Uzbekistan for citizens of the Republic of Korea introduced a visa-free regime, which will further strengthen the ties between our countries.

Last year, the mutual trade amounted to 1 billion 360 million US dollars, which is 27 percent more than in 2016.

The meeting noted the availability of all opportunities for further increase of this indicator. The state visit of the President of our country Shavkat Mirziyoyev to the Republic of Korea in November last year raised bilateral ties to a qualitatively new level. Now it is necessary to fully implement the agreements reached during the visit to the amount of over $ 10 billion and to assist representatives of the business community in their implementation.

Speaking about trade and economic and investment cooperation, the participants noted the wide conditions created for this in Uzbekistan. Today, the economy of our country is actively transforming. The legislative base is being improved, the investment climate is improving to further accelerate economic growth. The Government of Uzbekistan creates all conditions for effective activities and comprehensive support of South Korean companies.

The event stressed that the parties are equally interested in filling the Uzbek-South Korean cooperation with new content, enhancing contacts between business people and supporting joint projects.

The parties reviewed the implementation of projects within the framework of the Agreement on loans of the Foundation for Economic Cooperation and Development signed between the governments of the Republic of Uzbekistan and the Republic of Korea for 2018-2020.

"The Republic of Korea considers Uzbekistan one of its most important economic partners," Kim Dong Yong said. - We highly appreciate our cooperation. Our countries have ample opportunities for developing and implementing large investment projects. We are especially interested in expanding trade and economic and investment ties, partnership in the fields of the chemical industry, energy, textiles, high-tech production, and agriculture.

The meeting discussed the creation of a training and practical textile technopark in cooperation with the Korean Institute of Advanced Technologies (KIAT), the Uzbek-South Korean business center, the opening of the House of Korean Culture and Art, and others.

At the end of the event, a Memorandum of Understanding was signed on the establishment of a modern multidisciplinary medical center.