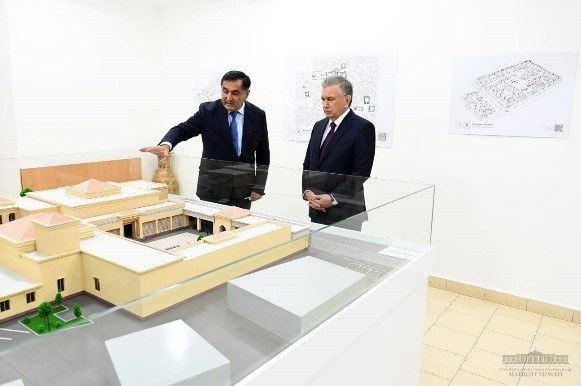 On October 18, President Shavkat Mirziyoyev visited the State Unitary Enterprise «TOSHKENTBOSHPLAN LITI» and got acquainted with the draft master plan of Tashkent city until 2045.

«Tashkent is our beautiful capital, the largest city in our country. We have created the conditions for investment and entrepreneurs for five years. The new houses and modern facilities have been built. Now it is necessary to think about the future and clearly define a strategy, otherwise, life in the city will become more complicated in ten years. The infrastructure will not withstand the additional load. From now on, we have no right to make mistakes. If we do not make a project for 50 years ahead, taking into account all the amenities for the people, the city will remain without architecture, without economy, without ecology», the President has said.

Today, the territory of Tashkent city is 43 thousand hectares, the population is approaching 3 million people. The load on the infrastructure has increased. The number of vehicles is growing every day, as well as the road traffic is becoming more and more complex. Dust and smoke negatively affect the environment.

Paying a special attention to this issue, the President set the task to preserve the architectural appearance of the capital, to take future construction projects outside the city. In particular, the concept of further development of the city was discussed last year at the opening ceremony of the New Uzbekistan Park and a meeting with the Tashkent voters.

The developers approached the task seriously and thoroughly. Foreign and domestic designers have been working on the project at the State Unitary Enterprise «TOSHKENTBOSHPLAN LITI» for two years. The dynamics of population growth, the state of transport and engineering communications, climate change were analyzed, and based on this a strategy for the development of transport hubs and settlements was developed.

During the presentation, the President was informed about this strategy.

First of all, it is set to digitize the cadastre of the city of Tashkent and make public information about the land categories. Users, including those who wish to set up their own business, can find out via the Internet which category a particular site belongs to.

The public transport will be improved to solve the problem of traffic jams. The presence of a bus stop within a radius of at least 15 minutes on foot from the house will become mandatory. Parking lots near public transport stops will also be established on the outskirts of the city on the principle of Park and Ride.

Another important measure is the establishment of social requirements for buildings. For example, if a multi-storey building is set to be built in a city, depending on its type, certain standards shall be established for the availability of a school, kindergarten, consumer service centers, parking spaces, as well as for the area to be landscaped.

The concept of New Tashkent is integrated into the draft mater plan of the city of Tashkent until 2045. This new city will be built to the east of the capital, between the Chirchiq and Qorasuv rivers. It will be designed to accommodate 500 thousand people.

Based on this, promising areas of development and housing, and the schemes of the main roads connecting the capital with the new city have been developed. In the first stage, it is planned to build up 6 thousand hectares.

Greening is important in the current era of global warming. To date, there are 7 thousand hectares of green areas left in Tashkent city. Based on the national project Yashil Makon (‘A Green Space’) initiated by the President, the draft master plan provides for creating a green belt around the great ring road, as well as establishing the theme parks along the canals flowing through the city. In general, it is set to increase the green areas to 25 thousand hectares.

«Our strategy for the development of the city was also approved by the authoritative experts of the world. Now, for each location, it is necessary to survey the people’s opinion, build wisely and efficiently. Our people deserve the new city which is appropriate to our climate, and it should be modern», Shavkat Mirziyoyev said.

The need for attracting the young specialists to the project, increasing their experience, and balanced development of the architectural appearance of districts and cities was noted. It was instructed to open the design centers in Samarkand, Bukhara, Kokand, Namangan and other cities.

The Projects were also presented for the reconstruction of the State Museum of Applied Arts and the History of Handicrafts of Uzbekistan, modernization of the architectural appearance of the administrative center of Denau district of Surkhandarya region.