Informal meeting of the CIS Heads of States 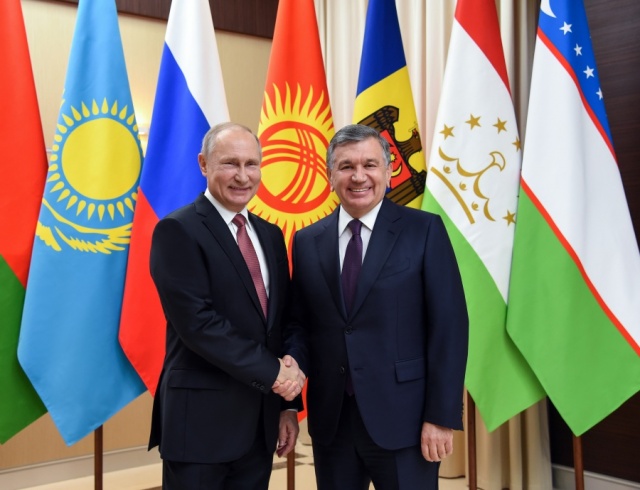 After the photographing ceremony, a meeting of the heads of the CIS member states began.

Vladimir Putin, welcoming the heads of states, told about the results of Russia’s presidency in the CIS. He noted that this year important activity was implemented on strengthening mutual integration and enhancing the credibility of the organization.

President Shavkat Mirziyoyev noted that this year cooperation of Uzbekistan with the CIS countries has become even stronger, the volume of trade turnover has significantly increased, emphasized that mutually beneficial cooperation closely connects the member states, this meeting will give a new impetus to the development of these relations.

It was noted that the upcoming events in Russia in 2018 are of great importance, people of Russia will vote for a worthy candidate at the presidential elections.

At the meeting, attention was paid to issues of development of cooperation between the Commonwealth states in various spheres, strengthening security, preventing risks and threats to the region.

As it is known, Uzbekistan is actively cooperating within the framework of the CIS. The interaction of our country with the member states of this organization is consistently developing in various areas. The Head of our state attended the meeting of the Council of the Heads of States of the CIS member states that was held on October 10-11, 2017, in Sochi. On November 3, a meeting of the Council of Heads of Governments was held in Tashkent.

In the Address of the President of the Republic of Uzbekistan to the Oliy Majlis, the priorities of our state in foreign policy were emphasized. It was noted that our country continues to develop relations with foreign states, including the CIS countries, at a new stage. Relations with neighboring countries has strengthened according to the principle of “Central Asia – the main priority in foreign policy of Uzbekistan”. This plays an important role in development of cooperation within the framework of the Commonwealth.

At the meeting, views were also exchanged on other issues of mutual interest.