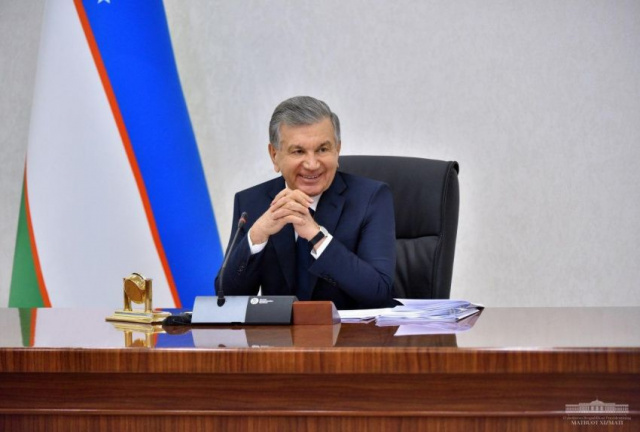 On May 26, President of the Republic of Uzbekistan Shavkat Mirziyoyev chaired a videoconference on investment issues. The progress of implementation of the Investment Program for January-April of the current year was analyzed and measures to ensure the unconditional fulfillment of forecast indicators, including the commissioning of large production facilities, social facilities and infrastructure, were discussed.

The investment program for 2020 includes more than 3 thousand projects, the implementation of which involves the development of capital investments in the amount of 235 trillion UZS, including foreign direct investments worth $7 billion.

There is more than a month left until the end of the first half of the year. In the current difficult period of the pandemic, the first results of work to ensure economic stability and implementation of investment projects appear.

For this reason, the Head of the state noted the need for giving the priority to those projects that are effective, especially by creating jobs and ensuring economic growth.

Special attention was paid to objects of the social sphere and infrastructure. It was indicated that the implementation of 38 such projects in Samarkand region, 89 in Tashkent and 41 projects in Khorezm region is progressing slowly.

The Ministry of Housing and Communal Services and the Ministry of Water Resources were instructed to speed up the construction of facilities financed from the Anti-Crisis Fund.

At the meeting it was emphasized that the jewelry and electrical industries should take advantage of this by multiplying production volumes and the number of jobs.

It is known that taking into account the current situation, 450 billion UZS included in the Investment Program were redirected from the construction of facilities, which can be postponed, to other purposes. In particular, 150 billion UZS were allocated for development of 40 thousand hectares of land and creation of 80 thousand permanent jobs.

At the meeting, it was noted that the leaders of each industry and regions should again consider budget-financed investment projects and optimize costs.

“Before implementing a project, we should find answers to questions such as: does this facility correspond to the interests of the region, will it bring real benefits to the local population, how many people will be employed”, said Shavkat Mirziyoyev.

Deputy Prime Ministers were instructed to introduce selection criteria into the Investment Program for the next year, primarily projects that provide for job creation and will help reduce poverty.

The cost of the object, the quality of projects and their implementation largely depend on the project documentation. Most of it currently does not meet international requirements, companies and specialists attracted from abroad cannot work with these projects.

In this regard, the importance of the speedy implementation of international standards was noted. Starting next year, all the process – from design to commissioning of large facilities at the expense of the budget – will be carried out in accordance with international standards. The restrictions on allocation of funds for design will also be lifted.

The Ministry of Construction has been instructed to implement international standards for development of project documentation, construction and examination. In this case, the responsibility of design organizations for field supervision will be clearly defined, and customers – for technical.

This year, 34 percent of direct investment from abroad falls on the oil and gas, energy, mining and metallurgical sectors, 52 percent – on regional projects. At the same time, it was noted that there is the possibility of a multiple increase in foreign investment in the electrical, chemical and food industries.

The Ministry of Investments and Foreign Trade, the Ministry of Economic Development and Poverty Reduction has been tasked with developing separate approaches to actively attracting investments in information technology, the jewelry, chemical, electrical industries, higher education and healthcare.

In general, as it was noted at the meeting, the approach to attracting direct investment should be changed, support for domestic investors should be expanded.

Preferences granted only to foreign investors will now apply to local private investors. For example, if the latter starts a project worth more than $25 million, external engineering and communications networks will be built at the expense of the budget.

Instructions have been given to encourage compatriots abroad to invest in Uzbekistan and to work continuously with such investors.

At the meeting, in the context of industries and regions, the potential risks of non-development of foreign investment due to a pandemic were considered. It was noted that on the basis of studying the prospects of such projects, they can be postponed or replaced with new ones.

The level of disbursement of funds for 98 projects financed by loans from international financial institutions has been criticized. Instruction was given to fix the problems as soon as possible and speed up the implementation of projects.

Within the framework of the Investment Program, this year it is planned to launch 206 large projects. There is a risk that 39 of them will not be implemented on time. The main part is in the energy, textile, electrical and transport sectors, as well as in Navoi, Namangan, Syrdarya and Fergana regions.

The President noted that as a result of implementing these projects, thousands of jobs will appear, import-substituting and export-oriented products will be produced. Corresponding instructions were given.

It was entrusted to form a standing commission for monitoring the commissioned large and medium-sized enterprises. It will deal with the issues of supplying enterprises with a sufficient amount of raw materials and infrastructure, ensuring their work with full capacity utilization.

It was emphasized that leaders of industries and regions should be interested in the fate of projects even after they are put into operation. They are also responsible for solving problems that arise.

Special attention at the meeting was devoted to issues of increasing investment in small projects aimed at increasing household incomes.

For example, in Andijan, projects were developed for a total amount of $40 million, providing for the organization of 7 clusters on horticulture, livestock, poultry based on home-based cooperation of more than 9 thousand residents. Instructions were given to create a similar system in other densely populated regions, taking into account this experience.

Responsible persons were instructed to find reserves and organize industrial zones in other areas with undeveloped industry.

The issue of increasing projects based on public-private partnership was also discussed.

At the videoconference, leaders of sectors and regions reported on the results of investment activities over the past period of the current year and plans before the end of the year.